Truth to be told, when we first came to Melbourne, we had no idea what was Footy. Footsy?? Or Footy?? Everyone kept telling us to watch AFL, which we absolutely have no idea what it was about either. After much googling, we realised Footy is another term for the Australian Football, and AFL, the Australian Football League. You can find the wiki explanation of Footy here, but a super simple description of Footy would be rugby, with Australian rules. (We are not a pro in either sport FYI)

If you go to the parks on weekends, there are many dads teaching their kids how to play the national sport. And since we were in Melbourne where most of the matches were played at, we decided to go for one of the AFL Live matches, specifically the match between St Kilda Football Club and the Brisbane Lions at the Marvel Stadium.

There are many entrances into the stadium grounds, but there will be a quick security check of your bags that you bring in, so just bring things that you really need!

If you’re like us, from countries where shops exploit the monopoly and end up charging double of what they would charge outside, then you’re in for a pleasant surprise! There are loads of food options inside the stadium, (including Maccas) and the prices are definitely reasonable. Among all the various food choices, you should definitely go for the iconic Four’n Twenty Meat Pies with Ketchup on top to complete the AFL Live experience. DO NOT, I repeat, DO NOT, forget about the meat pies. On top of that, popular snacks Aussies get are beer, burgers, and chips.

When you buy your tickets online here, you’ll be given the options of seats or just the stands. Although we got the seats, the stands are also quite alright, since you’ll be closer to the toilets and the food 😉 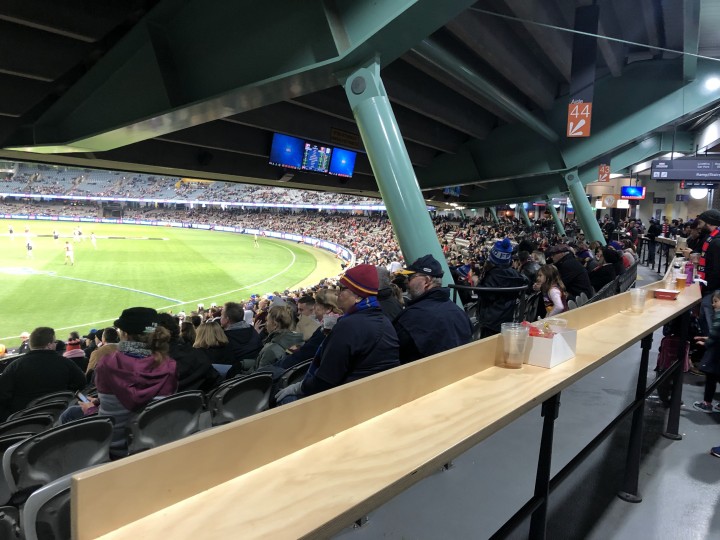 Crash Course on the Game

So, now for a quick crash course. How the scoring works is that players have to kick the ball between the 3 posts. So, for the goal in the middle, they get 6 points, while a goal in the side/touch one of the posts gets 1 point. For the whole game, there are 4 quarters, each lasting approximately 20-30minutes, depending on whether there are penalties involved. And then, you just watch them play. Players are allowed to tackle, but there are certain actions which can cause a foul. Either way, watch closely since you’re there watching the live match and it’s amazing to see supporters cheering for their own teams too 🙂

Regardless, if you happen to visit Melbourne, you should definitely set aside some time to watch the AFL Live, since most matches are played here. Sit in, soak yourself in the atmosphere and cheer the team that you choose!

Keep up with us!

D3 of staycay: it’s b’s birthday! had a mini celebration before heading to Pan Pacific for their high tea which was 💯 Dinner was at cook and brew as usual with food that did not disappoint 🥳
D2 of staycay: beach day! Went to Tanjong beach club @ Sentosa to chill and played @hydrodash.sg 🥳 did all these right before the rain came so we headed home after and soaked ourselves in the jacuzzi. Dinner was takeaway from Lao Pat Sat which wad actually pretty good 🥳
D1 of staycay: visited gardens by the bay as tourists (specifically cloud garden) and plans changed after as we wanted to go satay by the bay but it started pouring 😭 so we headed off for a massage @ Toa Payoh which was OOOOOF relaxing albeit painful especially with our stiff bodies.
Haven’t updated advenchertingz in so long because travel’s been restricted by covid19, but we have finally found the time to go for a staycation and explore SG! Stayed at Westin for 4 days and it’s definitely a holiday to remember 🥳
Looking back at our photos and kinda wish we could be travelling again 🥺 the world is truly your oyster and although we are now living with a *solid* roof over our heads, I actually miss & prefer being in touch with nature and animals and just the greenery and Mother Earth ❤️ We’re all limited by travelling restrictions but we should all be responsible for our actions and keeping the virus contained ☺️
hellu!!! It has been Long since we’ve checked in 😜 been back in SG for quite a while now (5 months, to be exact) and things haven’t been going so well. Especially with all the COVID happening around the world, it’s an important period to stay home to prevent anymore spread!! So now, we are stuck in our own homes for a month😔 was also supposed to go taiwan and KL this month but everything’s cancelled 😭 but that’s alright because we will come out of this stronger and travel again! Also got a dog @smokeyschnauzer who is staying @ b’s house. I WANT TO STEAL IT BACK!!!!!!!!!! 🙃 hopefully we can do some contactless Passover HAHAHAHHAHA hopefully we’ll be able to continue updating advenchertingz 💕till then! 💕tingz